Buy any of the series from your favorite retailer 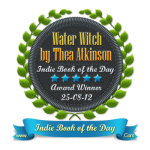 ALAYSHA is a unique witch jaded from the killing she has been asked to do for her megalomaniac father. Taught to love no one and see people only as targets, she becomes embroiled in a battle that forces her to see things differently. But has finding love only taken her into deeper waters of power and manipulation?

What Amazon readers are saying about Water Witch:

MysteryReader: “Though the stories and the heroines are different in many ways, I found myself repeatedly comparing Thea’s Alaysha in Water Witch to Jean Auel’s Ayla in the the Earth’s Children book series…and that, by the way, is a compliment….”

Gordon Bonnet: “… All I can say is that if you are new to Thea Atkinson’s work, start with this one. You won’t be disappointed. ”

Blood Witch: the sequel to Water Witch
Sarum is under siege and a recovering Alaysha finds herself at the heart of a covert war where even the enemy is unknown. Whether it’s the father she has spent nineteen years killing for, the witch of flame who promises to teach her control, or the charismatic Yenic who claims to love her, she must ultimately decide who to trust. If only that trust didn’t come at such a high price.

On the run from Aislin, Alaysha and her comrades enter the burnt lands only to suffer the real threat of starvation and thirst. If she could find a way to use the approaching travelers for her good, Alaysha is sure they’ll all be saved.

But when the fellow travelers turn out to be a caste of Enyalia who have no use for men save the one ritual they abduct them for, their salvation quickly shifts to a bid for freedom as Alaysha must find a way to save all her men from certain death.

Bone Witch is book three in the Elemental Magic series, a new adult supernatural fantasy series for women of all ages, but recommended for those over seventeen. There’s a good bit of intrigue, a smidgen of magic, and of course, some steamy romance.

When grieving water witch Alaysha leaves the Highlands in search of her half-brother, she thinks she’ll find peace, freedom, and a new life with those she loves. Her new found control of her power means she need never be exploited or used again. Too soon, she realizes she can’t avoid becoming embroiled in the darkest parts of Aislin’s war, she traps herself in a cycle of compassionless decisions that remind her more of her father than she’d like, and the people she cares about are even more embroiled in danger than before.

Read the fascinating final installment of the Witches of Etlantium and find out how power, manipulation, and finding yourself can take you on a gruesome, thrilling, yet deeply romantic ride. 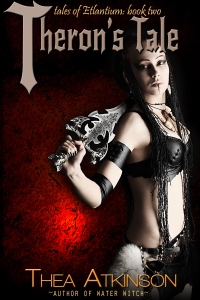 “The first conqueror came the day I received my first tattau. ”

So begins Theron’s tale, a story that will take him from his sacred mountain and the witch he loves to a world where women have but one need for men.

Readers of Water Witch will find this background story full of historical intrigue, enchantment, and old world mythology and legends with just a dose of reincarnation theory thrown in. Theron’s Tale is novella continuation of an epic fantasy series of short stories and novellas for all ages but is recommended for those readers over 16.

The wolves smelled the milk and blood on her and they came.Alkaia, the komandiri warrior of Enyalia, has been exiled from her homeland with nothing to help her survive–all because she dared free the man Theron from certain death. However, she is not alone: the infant son she bore is with her and he is even more vulnerable than she. Now, she must find a way to use that vulnerability to turn the odds in her favor.The question is: whose death will she have to exact in order to save her son?Readers of Water Witch will find this background supernatural fantasy novella full of historical intrigue, enchantment, and old world mythology.

Faintly reminiscent of the ideal of warrior women of the Amazon, Sons of Alkaia takes the matriarchal system to the extreme.

2 comments on “Witches of Etlantium”